Qingjian has been one of the most prolific developers in Singapore in recent times. In the last few years, it has launched a number of projects, including Visionaire EC that sold out two years ago. After Visionaire, it went on to iNz Residence (that has since sold out as well), followed by The Quest at Bukit Batok. The latest new development that it is launching now in 2018, is JadeScape at Marymount MRT station, in the Thomson neighbourhood.

The Thomson / Marymount area is one of the most popular neighbourhoods in Singapore. It is just on the outskirts of the Orchard Road district, 10 minutes drive from it via the Newton / Novena area. This is the central water catchment heart of Singapore, its green lung with a swathe of secondary forests, nature reserves, and 2 main reservoirs. The JadeScape condo in fact sits within walking distance of MacRitchie Reservoir Park. Many of the units here will get pocket side views of the reservoir itself, and the greenery around it.

Qingjian is sparing no expense to make JadeScape its trophy project. An internationally acclaimed architect, Paul Norikata Tange of Tange Associates, has been entrusted with the design. Mr Tange has drawn his inspiration for the project from MacRitchie Reservoir, mirroring the profile of the reservoir to form the water bodies and pools that flow through and under the development, and mirroring the waterfalls to form the landscaping. Hence its theme is “Garden Homes in Shunfu”. 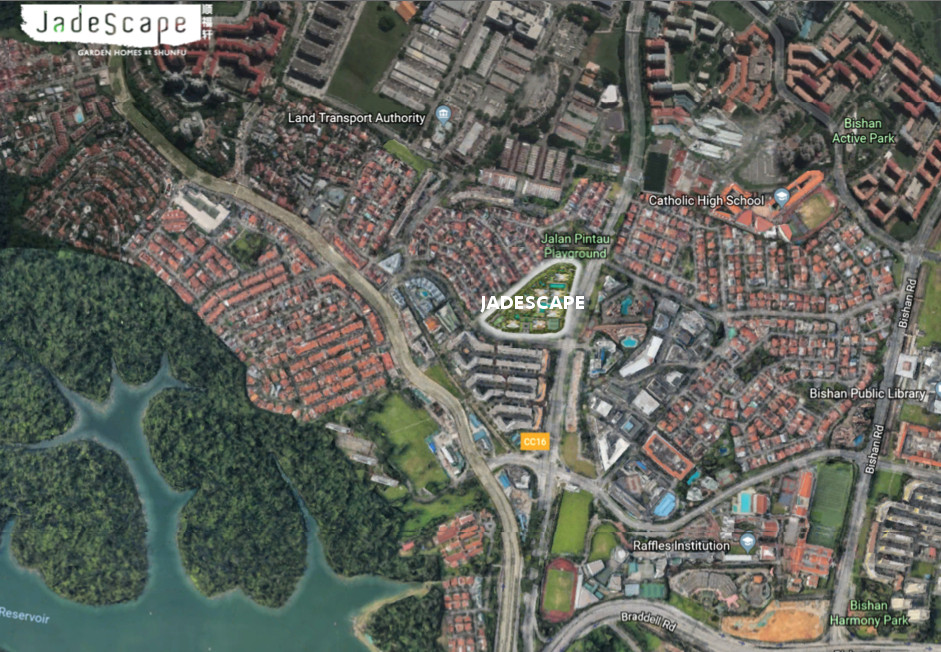 Besides potential pocket views of the greenery and water, the JadeScape condo also sits next to landed housing estates on its north-west and north. These are zoned for two to three storey high landed houses, which ensures unblocked views for many of the units facing that direction for quite a distance.

JadeScape is well served by most of the amenities. It is less than 4 minutes walk from Marymount MRT station, with easy access to shopping needs at Thomson Plaza and Shunfu Market opposite it, and Junction 8 nearby. It also boasts several good schools in the vicinity, such as Raffles Institution, Catholic High, and Ai Tong Primary. And of course, Thomson Road itself is well-known as a food haven, with stretches of the road lined on both sides by a wide selection of cafes, coffee shops, restaurants, offering both traditional hawker fare and cosmopolitan newcomers.

If this place interests you, or if you would like to make an appointment to view the JadeScape showflat, just drop us a line. We will be glad to send you the floor plans and details on the launch dates, and answer any questions you may have.

ABOUT THE VISIONAIRE EC

Register
Email Us
Call Us